A 21-year-old Nigerian trader based in Bondoukou, Cote d’Ivoire, Itunu Olajumoke Babalola, was sentenced to 20 years imprisonment on trumped-up charges after she was set up by corrupt officials to cover up a crime committed in her house by a DPO’s nephew.

Accoording to award-winning journalist, David Hundeyin, Itunu’s harrowing ordeal began in October 2019 after she reported a burglary in her apartment to the local police.

Hundeyin, who shared the young woman’s plight on Twitter, said that the Divisional Police Officer (DPO) in Bondoukou had prevailed on Itunu to drop the case after the suspected burglar turned out to be his 14-year-old nephew but she refused.

The DPO tried to bribe Babalola with N100,000 for her stolen items but she was adamant, sighting disparity between the value of the items and the money offered. The enraged DPO was said to have arranged trumped-up charges against her and sent her to detention.

“In September 2019, 21-year-old Itunu, a trader based in Bondoukou, Cote d’Ivoire travelled to Nigeria to visit her sick mum in Ibadan. Unknown to her, her return to Cote d’Ivoire would mark the start of a harrowing ordeal in a notorious Ivorian prison, which is still ongoing,” Hundeyin wrote.

“Shortly before Itunu was due to travel, her flat was burgled and items worth more than N300,000 were stolen, including her TV and gas cooker. Despite the blow, she decided to travel anyway after reporting the incident to the police. She returned from her trip in October 2019.

“Upon returning, she was informed by a lodger she left in her flat that the thief had been identified. The thief turned out to be a 14-year-old boy who lived nearby. His embarrassed dad apologised and admitted that his son was a habitual thief. The items had already been sold.

“Itunu reported this to the police who told her to return on Tuesday, November 5, 2019. The appointment was held on Wednesday, November 6. There she says, the Divisional Police Officer informed her that the suspect was in fact his nephew. He then offered her a settlement worth roughly N100,000 to drop the case.

“She refused the settlement, citing the disparity between the value of the stolen items and what was offered. Next, she says, the visibly enraged DPO tried everything to frustrate her to drop the case, including making her travel to Abidjan for a police appointment.”

Hundeyin continued by saying even when Itunu hired a lawyer, the police ensured they frustrated her case by refusing to cooperate with the lawyer.

“Frustrated, she returned home to Bondoukou. Around 5 pm the following day, a convoy of police vehicles showed up outside her house and publicly arrested her. On getting to the station, she was charged with theft –the theft of her own items in her own apartment. She spent the next 4 days in police custody, after which she was taken out of the cell and offered her freedom if she agreed to sign papers dropping her case.

“For whatever reason despite the clear bad faith displayed by the Ivorian police, Itunu says she rejected the offer and chose to go to court instead. She says she then overheard an officer saying “Elle est une Nigériane? Elle mourra ici!” (“She’s a Nigerian? She will die here!”)

“The decision to go to court turned out to be a monumental error of judgment compounded by her own naivety about the Ivorian justice system. The (French-speaking) court did not allow her adequate legal representation or give her a chance to properly state her case,” he added.

It was learnt that Itunu was speedily convicted and sentenced to 20 years imprisonment.

““Complicating this was her decision to identify herself to the court as ‘Becky Paul’. She says she did this to avoid getting her family name mixed up in bad news and potentially upsetting her aged mum.

“As a result, for the past one year and 4 months that she has been convicted, Itunu alias ‘Becky Paul’ has become, to all intents and purposes, a forgotten inmate at the notorious Maison d’arrêt et de Correction Bondoukou (Bondoukou Remand and Correction Facility).

“When her Nigerian friends in Cote d’Ivoire approached the Nigerian Embassy in Abidjan to provide consular assistance for her case, officials reportedly asked for N400,000 to get her a passport before anything can be done.

“She says she has exhausted all her savings over the past year, spending well over N1 million to try to clear her name while the Ivorian justice system as well as individual prison officials collude to frustrate all her efforts. She has lost hope and she has attempted suicide twice.”

Hundeyin has appealed to relevant authorities to help free Itunu as she is depressed and presently suicidal.

“She has lost hope and she has attempted suicide twice. This is an appeal for the sake of an innocent Nigerian woman stuck in a hostile foreign prison after being set up by corrupt officials to cover up a crime committed by an Ivorian DPO’s nephew,” Hundeyin wrote. 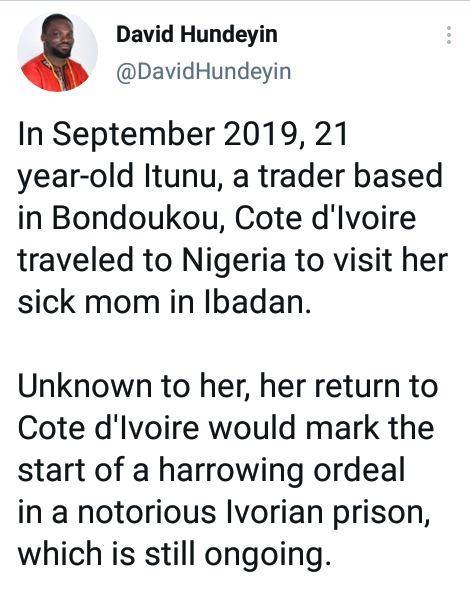 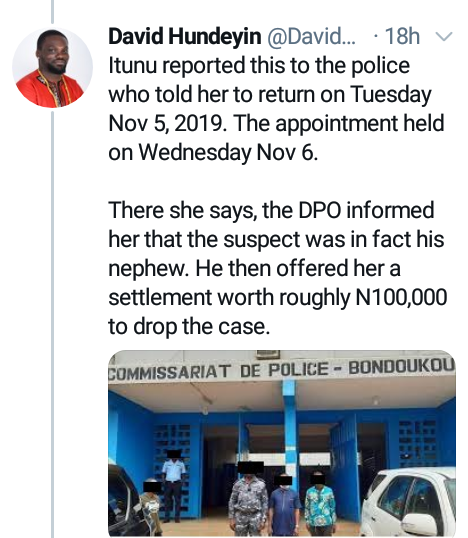 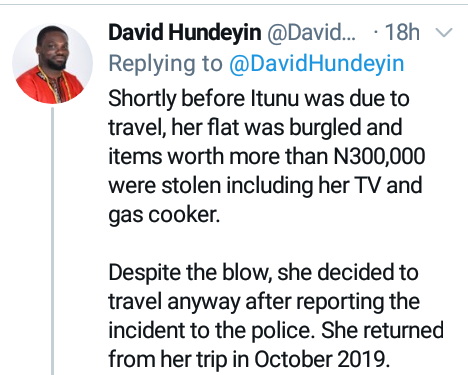 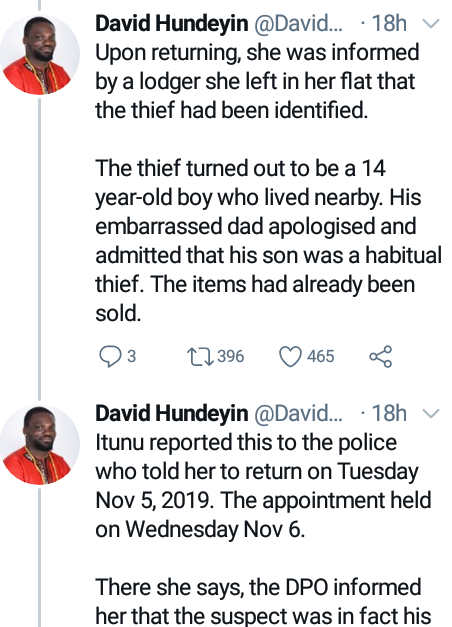 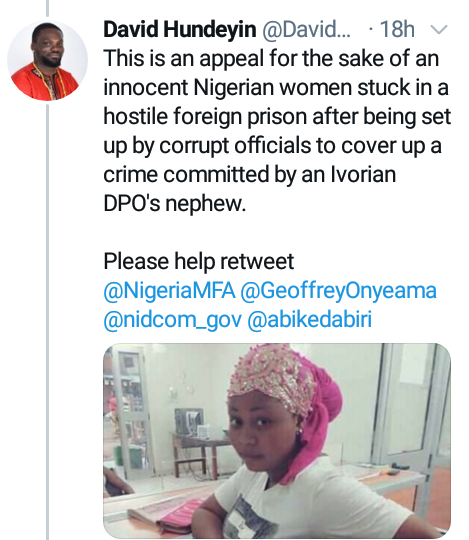